#USIGrad story: Starting from the bottom

#USIGrad story: Starting from the bottom 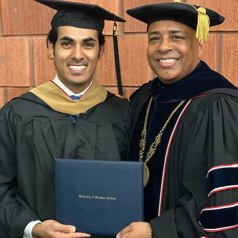 When Talal Alanazi ’17 M’19 arrived at USI from Saudi Arabia in 2012, his English was so limited that he had to point at the menu to order food in the University Center. “[The employee] said, ‘Cheese, ketchup?’ I said, ‘Yes, yes. Everything, yes.’ But I had no idea what she was saying,” Alanazi recalls. “I started from the bottom.”

After completing the Intensive English Program and double majoring in accounting and finance as an undergraduate, he is now a Master of Business Administration (MBA) graduate, looking for a full-time job in the Evansville area. “Because of USI and the community of USI, I am who I am today,” he says. “Absolutely, they changed my future forever.”

Heidi Gregori-Gahan, associate provost for international programs and services, considers Alanazi one of the University’s “best cultural ambassadors.” In addition to his studies and work at several on-campus jobs, Alanazi just wrapped up a four-month stint as the administrative coordinator for the Southwest Indiana Chamber. In 2016 he helped organize a partnership between Saudi Arabian students at USI and students involved in Arabic Club at Signature School. He and his peers traveled to the high school each week to help students learn the Arabic language and culture. “I was telling my group [a Saudi Arabian student organization], ‘We need to do something for the community, just to pay them back for what they’ve done for us, for accepting us, being so nice, being patient,” he explains. “It was a really great experience helping the community and showing the kids at Signature School different students USI had.”

His passion for giving back and determination to succeed in the classroom wouldn’t have been possible, however, without something many struggle to embrace: courage. “I’m brave,” Alanazi acknowledges. “You have to expose yourself to the world … We all would like to be comfy in one spot; we’re scared to change. But this is the way we all must think about it. We have to take ourselves out of the box. We have to stop being comfy.”

Over the past seven years, Alanazi has done that time and time again, starting with his decision to travel halfway around the world to attend USI. And he has no doubt it’s paid off. “The reputation of graduating from the United States is a powerful tool,” he says. “Wherever I go, I believe I will not find at any other places the same opportunities I found at USI.”