The Meter Reader: In Diane Seuss's Still Life with Two Dead Peacocks and a Girl "there is so much to see"
David Nilsen 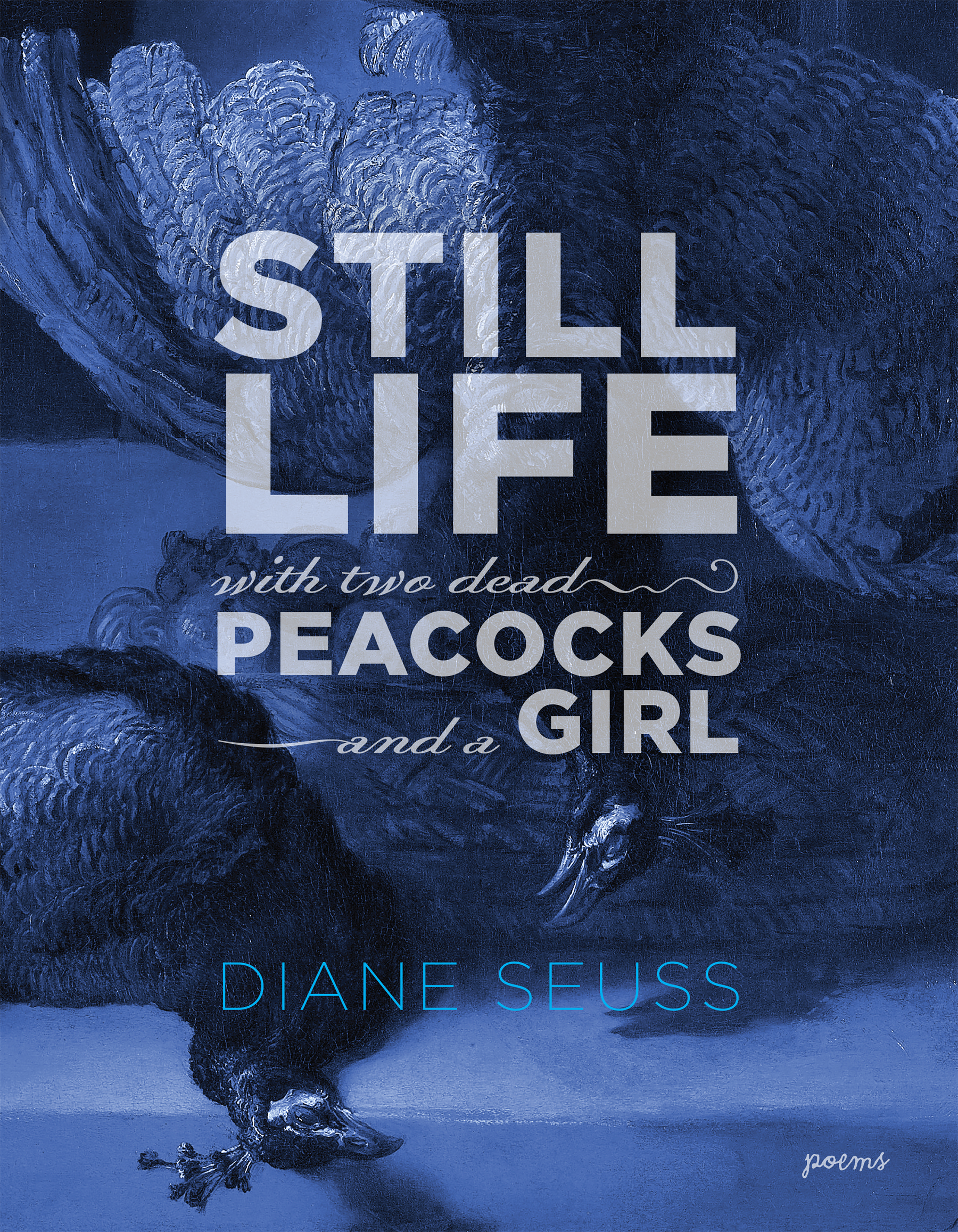 The title poem of Diane Seuss’s 2018 collection Still Life with Two Dead Peacocks and a Girl examines the eponymous painting by Rembrandt, a puzzling composition that, in Seuss’s hands, becomes compellingly complex. After fourteen lines of exploring the inner life of a small girl staring through a window at the titular fowl, the bait and switch of her life exemplified in these two dead birds in place of the pie Seuss imagines the girl had been hoping to find, we’re elbowed in the ribs with this closing sentence: “Art, useless as tits on a boar.”

If you wanted to convey Seuss’s gutter ball grace and confidence to a newcomer to her work in one poem, make it this one. For the majority of the poem, we get a sincere if unconventional ekphrastic exploration of this young girl’s inner and outer realities. There is the poet’s signature unnerving humor, to be sure, as in these lines:

She wanted pie, not these beautiful birds. Not a small, dusky apple

But if the majority of the poem takes a slant look at a classic painting, with a curl on the poet’s lips, it does so earnestly. And it is that set up, that earnest work for thirteen and a half lines, that allows for the sucker punch of that final half a line to pay off, to earn its place. It’s a joke best told with a smoker’s coughing laugh from a dive bar stool, but it’s Seuss’s skill that allows the line to earn that laugh while functioning as an honest part of the evaluation of the painting.

Commenting on art’s uselessness seems like an unexpected way to conclude the title poem of a collection of ekphrastic work. Seuss has little use for the stolid trappings of the generally reverential form she explores in Still Life, however. She doesn’t reflect so much on the content of the paintings themselves as the lives unfolding at real speed before the frame and after it. Life is anything but still, and Seuss refuses to confine herself to the single frame of each work. She refuses too to allow the artists she examines to hide behind their perfectly arranged compositions, and, by extension, refuses to allow herself to hide behind the carefully constructed order of a poem.

One imagines she could have picked a dozen different stories for each of her chosen muses, that she spun each frame and stopped it, looking at it from the angle where it landed, and wrote from that slant. Seuss renders still lifes epic, and epics, in some cases, still lifes, as when she captures the life of Medusa as a traumatized young woman living in a “rusted-out potato-chip-delivery-van / between the gasoline storage tanks and the river,” whose damage turns her world to stone.

Seuss’s poems have long dripped with wet decay, of life verdant and careless, and here she lends that same effect to long dried works of art. You can smell wet oils, deep green and messy, as she picks apart the motivations behind each captured character. Her language in “Memory Fed Me until It Didn’t” is lush with synaesthetic textures:

My eyes were hungry for paint, like I used to imagine

a horse could taste the green in its mouth

before its lips found the grass.

Then I woke to the words “still life,” not as the after-image

mince pie before the mind has come to claim it.

Still Life begins with this same primordial imagery, bursting with life and loss. In “I Have Lived My Whole Life in a Painting Called Paradise,” she starts

with the milkweeds splitting at the seams emancipating their seeds

of a damp bird held too tightly in a green hand.

The contrast between the faded earth tones and static compositions of the paintings that are Seuss’s subjects and the dripping, pulsing language of her explorations thereof creates the ironic tension that defines much of Still Life.

Irony and observation are not the entire picture, however. The moments when Seuss peers directly inward, without slant, are weighted with sincere fatigue and vulnerability. In “Silence Again,” in which Seuss looks at her father’s death after a his long, painful decline, she sees the permanent still life painting of death as a longed-for relief from the cacophony of his life.

My father, after all the yelling when he was a boy,

the threats, the bottles of whiskey, the guns,

and the racket of war when he was on that ship,

the Nashville, finally got to open his arms

to silence. Now, when I embrace it, silence,

especially at night, in the dark, I see my father’s

name, as if silence were the canvas he painted,

and his signature there in the corner.

It is the poem that directly precedes this in which Seuss offers perhaps her clearest thesis on still life as a form. “The Heroic Penetrates the Quotidian” is both title and first line, and it continues “but the quotidian, like a cockroach, / has strength in numbers.” The poem goes on to explain that every painting of action, every general on horseback and angel on wing is eventually stilled, and the epic moments their actions represent are buried under years of the boring, everyday details of living and dying. Much of life is still, whether that stillness is worthy of the brush of a master or not. If we remove the spikes from the graphs of our lives, the moments from which we craft our narratives, we could just as easily call “still life” mere “life.” So perhaps it’s not so strange to freeze these moments onto canvas, and for a Pulitzer-nominated poet to then reanimate them onto the page. Most of the time, “still life” is a redundant phrase. In Still Life with Two Dead Peacocks and a Girl, Diane Seuss shows us that in stillness, there is so much to see.

David Nilsen is a freelance writer living in Ohio. He is a National Book Critics Circle member, and his literary reviews and interviews have appeared or are forthcoming in The Rumpus, Gulf Coast, The Millions, The Georgia Review, and numerous other respected publications. You can find him online at davidnilsenwriter.com.